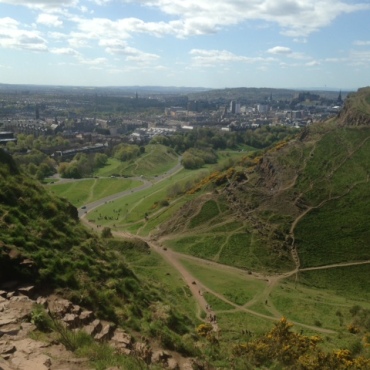 Before the descent from Arthur’s Seat

Heading towards the other side of the park

I spent this past weekend in Edinburgh, my last international destination while I am on exchange in Manchester. I was excited to see what Scotland had to offer me, and it didn’t disappoint! I stayed at High Street hostel, which was in a super good location! When you turn left out of the hostel, you can access the Royal Mile, which is a really long street lined with shops and restaurants that connects Edinburgh Castle with the Palace of Holyrood. It is really neat to explore. If you turn right out of the hostel, you can access Cowgate Street, which has a lot of bars and clubs and is thriving at night. Basically it was the perfect location for a hostel! Edinburgh has A LOT of hostels in this area, so you should have no problem finding one.

My first night there I basically just wandered all around and got a feel for the city. The next morning, I decided to wander slightly south of the city and stumbled upon the café where JK Rowling supposedly wrote Harry Potter, called The Elephant House. Super cool to see! Then I saw Greyfriars cemetery and kirk, which is a church and cemetery grounds near a pub. Apparently Greyfriars was an important guy, and a lot of significant people are buried in this cemetery, the most important being Greyfriars Bobbby, the dog. It was kind of cool but also a little bit eerie. I took a longer walk around and passed by the Meadows, which I didn’t go in to, but it looked like a lovely park area. I continued to the base of the castle, and found a market in the castle parking lot. They had stands with pastries, chocolates, vegetables, meats and cheeses. I got a few items from there that were absolutely delicious. I think this market is on every Saturday, so if you are in Edinburgh for the weekend, I recommend checking it out!

Next it was time to make the climb up to the castle. A lot of people I spoke to had said the castle wasn’t worth the amount you had to pay for admission (16 or 17 pounds, which is a lot), but I decided I should go there myself and decide. You can walk up to the grounds in front of the castle, where there are some incredible views of Edinburgh. I was also able to walk inside the castle entrance a little bit and see some of the castle structure. At this point, I decided it was better to not bother going in, since I had already seen the basis of the castle. Plus, the line to buy tickets was REALLY long. (They do have the option to buy tickets online, which I would recommend in order to save time in the queue.) So, instead I just walked around the base of the castle and took in the views.

Afterwards, I decided to walk the length of the Royal Mile, which was really neat. There are so many cool shops and restaurants. It was definitely entertaining and a nice walk! I continued all the way along it until I reached the Palace of Holyrood, which is the official residence for the Queen when she comes to Edinburgh. Again, I decided not to buy tickets and go inside; instead, I just snuck some photos from the palace gates. Opposite the castle is the Scottish Parliament. I was expecting a grand, old, castle-like building, but I found quite the opposite: the building was very modern and architecturally interesting. It was definitely not what I expected to see, as it was one of the most modern buildings I saw in Edinburgh, but it was definitely intriguing.

Just up from the Palace and the Parliament buildings is Holyrood Park, where you can hike up to the peak of Arthur’s Seat. This is where the volcano erupted that created Edinburgh, and Arthur’s Seat is the very top of this volcano. (In case you were wondering, no, the volcano isn’t active anymore, and it is safe to hike up.) Unfortunately, it was very warm by this time, but since I didn’t want to go all the way back up to the hostel just to drop my jacket off, I decided to tough it out. But be forewarned: make sure you check the weather before you go! (Though it does get pretty windy at the top.) There are many different ways to do this hike, but I decided to start with the main path. It was slightly rocky (to be expected, of course) but not too bad. I stopped a lot along the way, mostly because it was quite warm out and I needed to catch my breath, but also because the views are incredible as you are hiking up and all around you.

The views near the top are almost just as good as those at the peak. The peak, Arthur’s Seat, is extremely rocky so you have to be careful you don’t slip on the rocks. There are panoramic views in every direction. You can see towards the sea and also towards the city centre, and everything in-between. It was incredible. The harder part was coming down. I debated about going back the same way I had came, but decided I would go the other way so I could get more views of the city centre. This turned out to be a bad decision. The first half of the descent from the peak basically consisted of me scaling the mountainside. There wasn’t really a clear path and it was super steep. Needless to say, I got pretty dirty. Luckily there were people in front of me that I could follow, for the most part. About halfway down there is a set of rocky stairs, which makes it a lot easier. But the first part of the descent is definitely difficult. It might be easier going up this way instead of down, but I can’t say for sure.

After descending the stairs, there is a bit of a valley and you again get the decision to choose which way to go: you can cut through the valley, hike up some more cliffs, or hike on the side/in front of the cliffs. I went with the last option, because I wanted views of the city centre, but my legs were hurting too much for me to hike all the way up some more cliffs. This part of the hike was relatively easy: the road was fairly smooth and only had a slight incline. The views of the city were incredible as well, and you could see the cliffs above, which were so cool. A warning though, there are signs that advertise rocks can fall off the cliffs, and I did hear a little bit of them falling as I was walking, so you do have to be careful. This path winds all the way around the side of the cliffs and then descends again to bring you back to the entrance at Holyrood Park.

Hiking up to Arthurs Seat 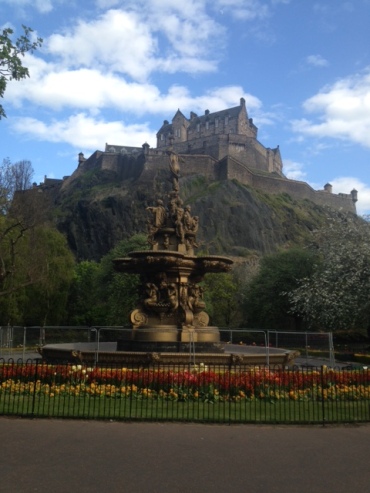 A view of the castle from Princes St gardens

Hiking to Arthur’s Seat was pretty fun and did offer some incredible views, but I was so exhausted afterwards that I had to stop at a café along the Royal Mile and grab some food and a lot of water. I honestly contemplated going back to the hostel for a nap because I was so tired! But, I decided to keep going, because I wanted to check out some gardens in the city centre which had been closed the previous night. So, I headed back up the Royal Mile and over to Princes Street. This street has all of the main stores on one side, and a park filled with lovely gardens on the other. I spent awhile strolling through the park. It offers incredible views of the castle above and had so many flowers, plus it was filled with people enjoying the scenery and lovely weather. It was really nice to spend some time there. After taking it all in and exploring a few shops along Princes Street, my legs were beginning to feel like they were going to fall off, so I decided it was time to head back to the hostel. I had a really good sleep and was on my way back to Manchester the next morning.

I really enjoyed my time in Edinburgh. It was definitely my favourite place in the UK that I have seen so far! The scenery is just spectacular. Scotland in general has so much greenery! I took the bus from Manchester, and driving through the English & Scottish countryside is really neat, because there is wonderful scenery practically everywhere you turn. Plus, the bus station is really close to the city centre of Edinburgh, which is very convenient. (They have a central train station on Princes Street as well.) If you take a trip to Edinburgh, I would definitely recommend walking the length of the Royal Mile, because you will be able to take in all of the wonderful sights and monuments of Edinburgh. If you are into hiking, I would also suggest to do the hike to Arthur’s Seat, because the views are absolutely incredible. I really hope I can come back to Edinburgh some day, and it would be really neat to explore some other areas of Scotland as well!